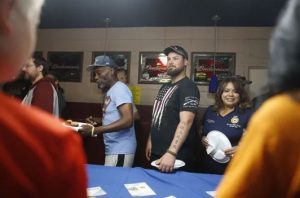 In a weekend full of parades and celebrations, dozens of veterans quietly filled a Phoenix American Legion Post Saturday ahead of Veterans Day.

They sat patiently through speakers who thanked them for their service before they filled their plates with waffles and oatmeal and chatted with the others at their tables.

It was a scene that could likely be found in countless American Legion Posts across the country over Veterans Day weekend — except the men and women at the Travis L. Williams American Legion Post were homeless. Each one was bused in from one of the veteran’s homes throughout the Valley.

Approximately 11 percent of the adult homeless population are veterans, according to the U.S. Department of Veterans Affairs. Without stable shelter, the National Coalition for Homeless Veterans said it’s challenging for veterans to find housing or a job. This is often coupled with lingering effects of post-traumatic stress disorder and substance abuse.

State Rep. Reginald Bolding, D-Phoenix, said it’s not just that the men and women in attendance were homeless, but they had been forgotten by those they had served. The current system and community needs to do more to take care of veterans, he said.

“You are not forgotten,” Bolding said. “We truly believe in the service you’ve given and we want to give back to you to thank you for giving so much.”

Bolding introduced a bill that provided free state identification and birth certificates to homeless veterans. It was signed into law earlier this year. Both the new law and events like the forgotten heroes breakfasts were just examples of how Arizona should be thanking their veterans.

“We have to provide opportunities to give back to those who gave to us,” Bolding said.

Each attendee also left the event with care packages full of clothing, toiletries and fresh vegetables.

To Ronald Bolden, American Legion Post 65 house committee chairman, it was the least they could do.

“There’s no excuse for any veteran to be out here walking the street that don’t have a place to lay his head, have clean clothing or food to eat,” he said.